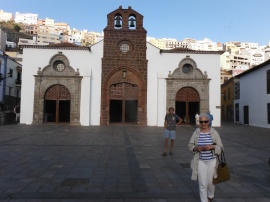 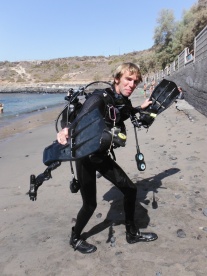 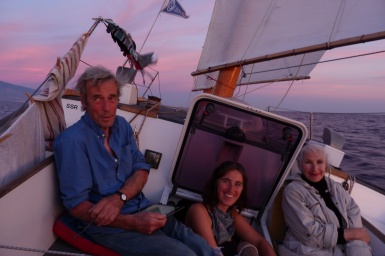 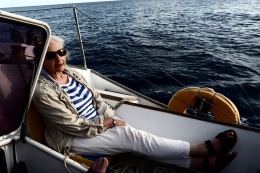 We are in Las Galletas at the moment on the south coast of Tenerife where we  were based last week while my parents were visiting. We took a berth in the very friendly and snug Marina del Sur in front of the village and we explored inland by car, and the neighbouring island of La Gomera on Hestur.
Las Galletas is a very low key place it feels very much like a local town rather than a tourist resort, unlike many of the other places in the south. It is not pretentious or even very smart, but it has a nice atmosphere and a charm and the longer we stay the more we like it. There is a black sand and pebble beach along the front and a short walk to the west of the village is another little beach with great snorkelling and a sweet beach -bar/shack which backs on to a dusty cactus landscape and turquoise sea swirling round the rocks and headlands further west.
We took a few car trips into the island. The national park of Teide, has Pico de Teide, the highest mountain at 3717m which is very spectacular. The park is a large area in the center of the island which encompasses strange and beautiful landscapes of volcanic rocks and formations. The drive up (and down) is spectacular. We passed the developed flatter lands on the coast with banana plantations and twisted up through cactus and then shady pine forests before emerging over a ridge which brings you in to a flat crater surrounded by a rock ridge, and the view of Pico de Teide itself. We had a great walk round a long spine of rocks which jutted out of the flat ground. They are weathered and sharp fangs of rock. It was chilly up there ( although very hot at sea level) and the weather forecast at the summit of Teide was 80 kmph winds and -5degrees.
On another day we drove to the north east of the island over very steep hair pinned roads, a very dramatic pass, and back home over the national park road again in the beautiful evening light. From the high pass we could see La Gomera, La Palma, and Isla de Hirerro the three Canarie islands to the west of Tenerife.
The winds were very light last week. We made a very nice trip to the neighbouring island of La Gomera ( 25NM) for a night and a day. We motored over on Monday ( 21st) as the wind was so light that day, but it was a fabulous trip, sunny and nicely relaxing. We saw a big pod of whales, which we circled round for a while ( or vice versa), we are yet to find their name, and arrived in St. Sebastian mid afternoon. Its a very pretty place. We checked in to the marina there, as the anchorage is some distance from he village and we only had a day really so it was nice to be in the town its self. We had a lovely wander round the village that evening. There are lots of very sweet and well looking cats there which we saw being fed late in the evening by a man and woman who came along with a big bag of something, and bottles of water to fill up the tin dishes hidden in tree roots for them.
We rented a car the following day and drove round the island. What a lovely place. We wound up the roads and over the ridge to the north of the island. The center and higher ground was much greener and lusher than anywhere we have seen in the Canaries so far. There we lots of little terrace gardens and feilds across the hill sides. We found some particularly nice bars and cafes in the small, and very un-touristy villages on route, and lovely swimming beaches with big rolling waves from the northerly swell. It was great to see the island, and really wonderful to have the car so we could whizz round and visit so many nice spots.
We had a fabulous sail back in the evening. From nowhere, a perfect breeze picked up and we sailed most of the way back at 5 knots on a flat sea. That was a real bonus because we had been looking down on the sea all day from the high passes and it looked as still and motionless as it is possible to imagine. We left in the early evening and with music playing and cool beers we watched a fantastic sun set over La Gomera. We had dinner aboard before dark. It was lovely having Mum and Dad for this trip, as it was so nice for us to show them what our cruising life is like. We arrived back to Las Galletas at midnight, sleepy but happy with the great trip.
We packed a lot into the week! lots of swimming and some snorkelling at the little beaches and natural pool at Las Galletas, tapas and cervesa stops, a trip to Santa Cruse, the capital of Tenerife, which is very a nice city, it feels very sophisticated, and not touristy. There is a temporary exhibition of Henry Moore sculptures in the streets there just now, and we went to the TEA (Tenerife Espacio de las Artes) and the African Market.

On Friday (25th) Mum and Dad’s last day: Dad, Dan and I went Go -Karting in Super- 400cc flyers! It was a real thrill. We went to the track the day before to suss it out. I had spied my place on the podium, however as it transpired I actually had a much lesser climb up than I had imagined. I felt it in my arms and legs the next day!
It was great to have Mum and Dad out, and very nice for them I think to see Hestur ( and us) in such fine fettle.
Yesterday Dan booked a couple of dives with a dive center while we are here. He went out yesterday and again today. He said yesterday was brilliant and he saw lots of fish and swam amongst underwater rock formations, caves etc. Today I was invited to come too if I wanted to go snorkelling. We went to a beach on the west side. A really tiny little cove with a village and one bar right on the front. There were 5 divers in the group and myself and another snorkeler, we swam out amongst the small boat mooring in front of the village with the divers swimming along below us, and not far off the beach we saw turtles! The dive instructor took us right up to them, they are very familiar and friendly/curious with people. They were amazing to swim with. It wasn’t very deep so I could easily dive down and see them close up. After the others carried on out into deeper water. What a great experience!
We have a list of jobs to do aboard and preparations to make for the next leg of the trip. We have been sorting these out and ticking things off the list but we will say a while longer here I think, perhaps get a bus up to Santa Cruse to get to some of the bigger shops tomorrow.